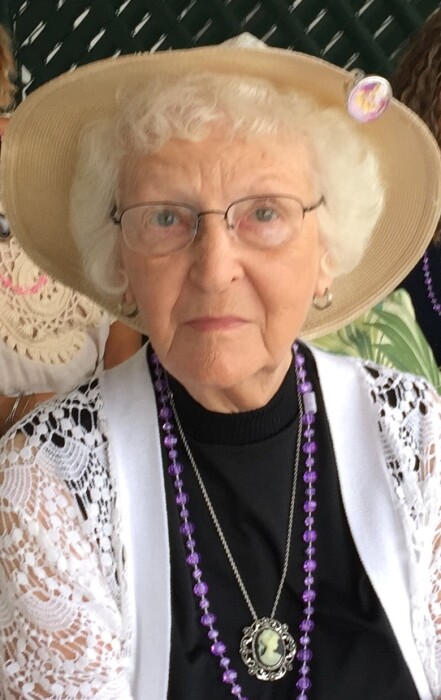 SHAMOKIN - (Bertha) Jean Moyer, 96, of 824 E Dewart Street, passed away on Sunday, March 28, 2021, at the home where she had resided for nearly 62 years. The past year was made possible by the loving care of her daughter, Bobbi.

Jean was born on March 24, 1925, the daughter of John A. A. and Florence (Robinson) Bordner. She grew up in a large family that included sisters Eleanor Phillips, Ruby Pianis, Sarah Bartlett, and Eloise Martini and brothers Tom Griffith, Russell Bordner, and William Wenrich.

Jean attended Shamokin area schools in her younger years before moving to Elysburg and graduating from Ralpho Township High School in 1942. She was employed at the Shamokin City Tax Office, the Shamokin-Coal Township Chamber of Commerce and worked as a reading aide at the elementary level in Shamokin Area School District. Jean and Bob also spent many summers working at Knoebels Amusement Resort.

Jean was a lifelong member of the First United Methodist Church in Shamokin.  She enjoyed playing the piano and accordion, square dancing, tending flowers in her yard and spending time with her family.  Most of all, she loved seeing her children and grandchildren.

(Bertha) Jean Moyer, 96, of 824 E Dewart Street, Shamokin – Graveside services will be private at the convenience of the family. Arrangements are being cared for by Farrow-C.J. Lucas Funeral and Cremation Service, 240 W Chestnut Street, Shamokin, Lori Ann Campbell, Supervisor. In lieu of flowers memorial contributions may be made to the First United Methodist Church, 100 E Sunbury Street, Shamokin, PA, 17872. To send condolences to the family please visit www.farrowfh.com

A service summary is not available

Plant a tree in memory of (Bertha) Jean (Bordner) Moyer

A Memorial Tree was planted for (Bertha) Jean Moyer

We are deeply sorry for your loss ~ the staff at Farrow - C. J. Lucas Funeral and Cremation Service
Join in honoring their life - plant a memorial tree

Plant a tree in memory of (Bertha) Jean (Bordner) Moyer